Finding The Story, Part I

I’m in New York City right now, sitting on my brother and sister-in-law’s couch, drinking a cup of coffee, and waiting to head out into the dreary, rainy weather. For someone from a desert climate, this is paradise.

And needed, for my dry, crackly, lizard skin that I’m sure most of the country believes all Arizonans have.

With my superhero action figures.

There’s nothing sweeter than having Green Lantern and The Flash turn on their former best-friend Superman, only to join a faction led by the X-Men villain Sabertooth to become the undisputed champions, leading to Superman’s return weeks later with longer hair and a badder attitude, for the sole purpose of getting revenge on his former friends.

And that all happened in one afternoon.

That might have been the first bit of long-form storytelling I ever did, but it wasn’t the last. Or the longest, for that matter.

Delilah S. Dawson (Star Wars: Phasma, Wake of Vultures) wrote on Twitter a while ago about the realization she had about what kind of storyteller she wanted to be, stating: 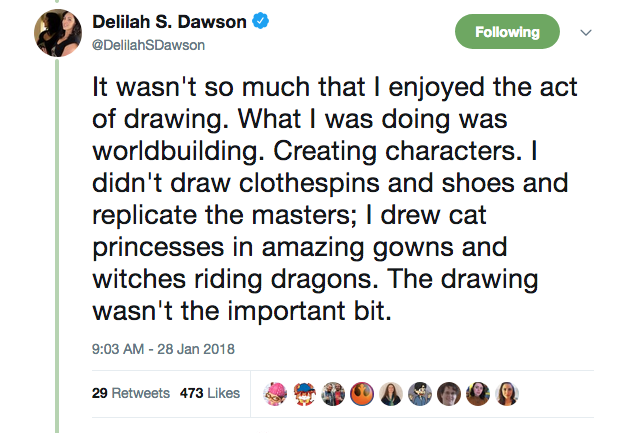 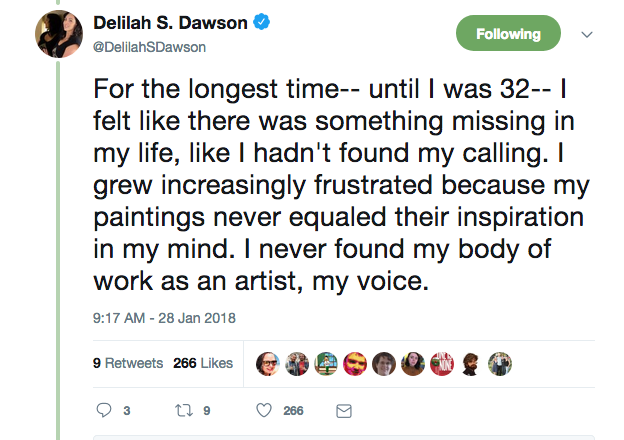 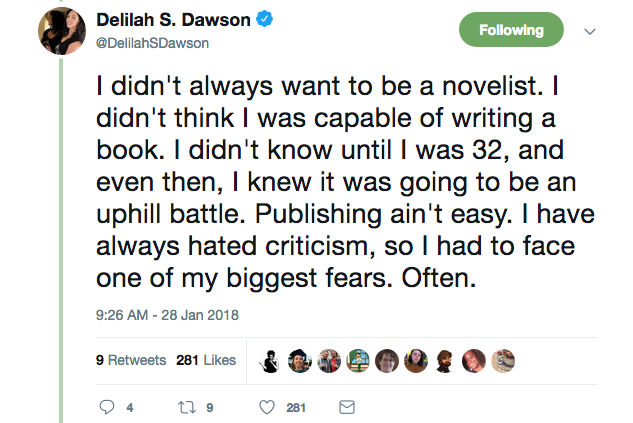 This made me think about my own storytelling journey.

Drawing comic books, I thought, was my designated path. My school career was filled with long form, dreamscape stories. Pokemon trainer versions of me and my friends, a Marvel superhero that paralleled Batman Beyond that’s lasted over 15 years, and the teenage future fantasy (which would attempt to be the subject of my first novel.) So I spent afternoons upon mornings drawing out character designs and comic covers, somehow knowing these would become fantastic collectors items once I made my way to the world of comics.

What I know now to be important is each of these stories were critical to me for one reason.

I always had to know what happened next.

And for a while, I thought that’s what was meant to be. A visual artist. So, for years, I had this idea that going to art college and becoming a comic book artist was the way to go. To express that I didn’t have the talent, nor skills, is a statement that’s taken me years to get used to saying.

I failed at becoming a comic book artist, but that didn’t stop me from plotting more stories which I would TOTALLY get around to drawing at some point I promise don’t judge me…

Filling college and high school notebooks are scraps of paper with plot outlines and character sketches, all while I should have been listening in Geology 101.

I graduated college, so it didn’t impact me too much…

To get to this point in my life I had to first learn why I was wrong.

It wasn’t the drawing, or the action figures, or the escape from mundane 9-to-5 jobs that kept me engrossed and living one foot in these fragmentary planes in my mind.

It was the stories.

Robert Acosta is an elementary school teacher with a specialty in language arts and writing. He taught for six years in both Tucson and Phoenix before starting his own private tutoring business to serve the greater metro Phoenix area. As a freelance writer his work appears on George Takei’s “Oh Myyy” properties, as well as Uber Facts. He’s average at drawing, above-average at Magic the Gathering, and an expert at changing diapers in the front seat of cars. He currently resides in Phoenix, AZ. with his wife, two black cats, and twin sons. FifthDraft.com is where he discusses what he learns on his quest to become a published author (and the greatest Pokémon League Champion of all time).

One thought on “Finding The Story, Part I”