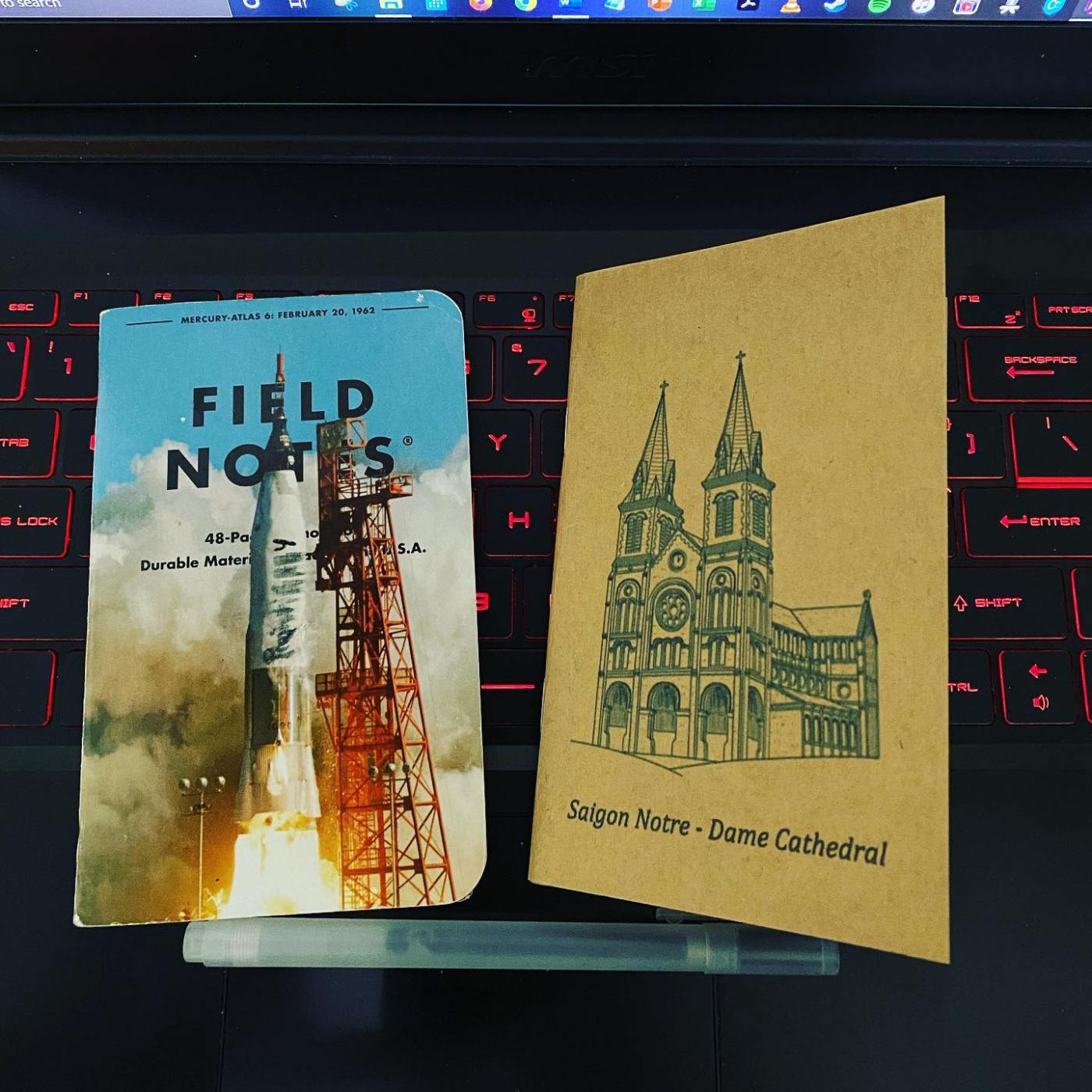 The featured image feels right for this post. On the left is a Field Notes Three Missions edition, featuring the Mercury Program which ran from 1958-1963. It felt appropriate to use a space-inspired notebook to begin plotting out Project: GREY, my middle-grade science-fiction story. I filled it up nearly 3 years ago with thoughts and story beats about this (hopeful) series.

The notebook on the right is one I picked up two years ago in Vietnam at the Notre Dame Cathedral of Saigon, which is featured on the cover. I’m using it to plot out the pacing and sequences of GREY to figure out how to improve the story structure.

Because, if my recent interactions with literary agents is any indication, there’s a pacing issue.

I just received my 10th rejection letter the other day. The blog is named “11 Rejections In” because even though I didn’t receive a “No Thank You, Sir” letter from one particular agent, I just saw in my Agent Query spreadsheet (which every aspiring author should have to keep track of who they have queried) their submission guidelines stated if you did not hear a response after 6 weeks then it was a “Pass,” so, that counts. I’m referring to a 10th letter, addressed in e-mail form, to me, saying they will not represent Project: GREY.

S’okay. You read and hear stories enough times in the Online Author Space about published writers who went through 20 or 30 rejections before they found someone to fit just right with their story, so I’m not worried. This just felt like a good place to mark the occasion.

11 rejections in. Everything on the way out. No worries about that.

What slightly worries (Concerns? Troubles?) me was the helpful advice I’ve received from some of them. Not every agent will have time to be specific in their reply. Some have a polite, well-mannered response ready to go, saying they appreciate your interest in their agency but they will pass on your book. What’s more uncommon is if the agent decides to give you distinct feedback on your book. What they liked, what they didn’t like, etc.

Now, and this is important, it is your job to take this advice with a HEAVY, MASSIVE, HUGE GRAIN OF SALT. Like, that thing is probably the size of a small child or a medium-sized dog.

What I mean by that is, “What are they saying in comparison to what other people have said?”

For example, if you had beta readers take a look at your work (and I mean readers who have experience reading in your genre and would know a good story from a bad one) and they all mentioned they loved your main character and their journey, but an agent said something like, “I’m not getting this character,” then perhaps that agent wasn’t the one to represent you best. Maybe they didn’t get you, you know? That’s nothing against the agent and it’s nothing against your writing. It’s for the best they recognized you two weren’t compatible. You buck up and submit somewhere else.

But, what if the agents giving feedback are all saying the same thing? What if they all have a similar criticism of your work and none of your beta reader has said anything about it? Well, then it’s your job to find that gather up their criticisms, see what’s in the middle of that Venn diagram, and figure out the problem.

I’m having that issue right now.

My most recent rejections all noted particular areas with Project: GREY which could be improved on. I won’t be specific as to the issue (nor will I say who the agents were), but, the best analogy I can think of is something like this:

Let’s say I made a cupcake for someone’s birthday. Chocolate, with raspberries and strawberries in the center, and a cream cheese frosting.

What I’m hearing from these agents is this: “We LOVE this cupcake, however, it took a little too long to make. Also, could you take this cupcake from Cupcake Size up to Full-Cake Size? Also, you seemed to use way more raspberries than strawberries. Do you think maybe you need to fix the raspberry/strawberry ratio? We would love to try this cupcake again, if you can make those changes.”

I’ve NEVER heard any of those comments from my Beta Readers. In fact, when I discussed it with a few of them, some were surprised. They thought the raspberry/strawberry ratio was fine and there wasn’t an issue with how long it took me to make the cupcake.

So, what does this mean?

It means the agents are clearly seeing something, something only they with their well-trained minds, can understand. This is their job, after all. They are the experts. If there’s something more than one of them is commenting on, then it’s your job to make it right.

Project: GREY just got pushed to the top of the queue (Alpha project) in terms of focus, most likely getting an hour of work a day when I’m able.

Project: NESS, my middle-grade modern fantasy, is now the Beta project, meaning I’ll work on it 30 minutes at a time.

Project: DEED, a middle-grade realistic fiction/fantasy, is now the Gamma project, meaning I’ll give it 15 minute chunks if I have ANY time left over.

This is what you do.

You listen, you learn, you remain open-minded, and you get back to work.

11 rejections in. Everything on the way out.