Happy Post-Easter, everyone! I hope each of you put out enough bibles to satisfy the angry rabbit god who comes around to poop candy flavored eggs all over your pianos, thus sparing you from his wrath.

I may not know how Easter works.

I wrapped up last week driving to/from Tucson all in one day. I’ve made this drive, no joke, 500+ times in the last 5 years at least. Minimum. When my wife and I were in the early days of our relationship this was a frequent occurence, sometimes at 4 or 5 in the morning to beat rush hour traffic. It was a nightmare and I’m glad it’s over and we’re both in the same city now.

However, speaking to people who live only in Tucson/Phoenix, they say the drive is awful. It’s really not. Just a fast, quick 2 hours, barely longer than the average podcast, and you’re there.

One thing which could alleviate the pain some people put in their minds is a bullet train. My wife introduced me to the idea in our first year of dating and it’s never left. I rode the bullet train in Japan last year from Kyoto to Tokyo and, wow, it was perfect. So slick, so quick, and so handy.

Kind of wish we had one here.

Hello. Welcome to Weeknotes, the week that was. Let’s see what happened last week.

Project: GREY is more than halfway done. I should be much further along, but I’m not beating myself up over it. Deadline for the 3rd draft is April 30 and it’ll be done. I’m just a bit behind my daily counter. 4 pages a day. That’s what I set up for myself.

Since then, I’ve had a few 10 page days, where I look through the copy edits I made on a printed up copy of the novel, then make the adjustments in a copied 1st draft. So, 1st draft was typed, 2nd draft was edited on paper with red pen, 3rd draft is back on the laptop.

Until I saw this, from professional author Delilah S. Dawson’s Instagram:

The glamorous life of a writer on tour: Waiting for my flight home on Easter. Got 157 pages to line edit, due tomorrow.

If there was ever a DragonBall Z-esque power-level difference between a published, professional author and some schmuck (*waves) who’s working on becoming one, there it is.

This also reminds of this other little story about professional authors and there skill-sets, courtesy of Warren Ellis:

Georges Simenon used to write a novel in eight days, producing between six thousand and eight thousand words a day. He’d start at dawn each day and be done by 10.30am, drenched in sweat. In his younger days, it’s said, he’d throw up after completing his shift. One of my favourite stories about Michael Moorcock is that he’d start a book on a Monday when the bill from Harrods came in and deliver the novel on Friday to get the cheque to pay it.

The moment you decide to become an author you step into the realm of the gods.

Batman: I Am Bane by Tom King (writer) and David Finch (artist) (Amazon)

This is volume 3 of Tom King’s run on the Batman comic, starting all the way back in 2016.

Knowing what I know now about the upcoming storyline (as of writing), “City of Bane,” it’s crazy to see what King and co. had planned over 2 years ago.

King’s real life CIA experience plays out in Batman’s every move. Cold, calculated, and precision strikes as Batman is pushed up against a wall physically against the monster Bane, who’s come to Gotham for revenge. Forced on the run, Batman uses allies from the most unexpected places to stay alive.

King does this other thing where he doesn’t rely on the past in ways other comic books do. Since most serialized comic series are built on 70+ years of history, it’s easy to fall on past issues as a crutch to fill in blanks when you don’t know what to do. Instead, King uses these characters past experiences to shine light on who they are as people. Just look at the issue comparing Bane and Bruce’s upbringing where Bruce spent hours reading in his mansion library and Bane killed crabs in his water prison to survive.

Again, David Finch proves he fits in perfectly in Gotham, and I’m sad to see this is his last outing in the Dark Knight’s hometown. Once again I can’t wait for the next volume. 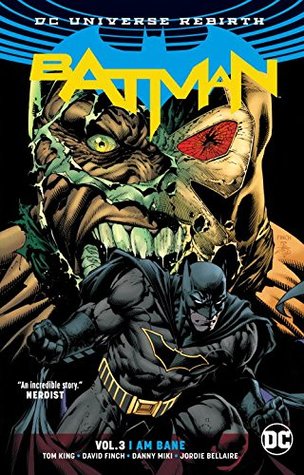 -When I started writing Fifth Draft, I figured I’d write about multiple topics over numerous posts. This is now known as a Blog Chain, or a series of blogs all expanding on the same subject. If you’re interested in writing online for any reason, consider checking this piece out by Christian Mihai about Tagging and Categorizing.

-Interesting piece about the rise of using real-world photos used in biopics to help bridge the divide between fiction and reality. Strange, when you consider all film is used as emotional manipulation and this only deepens it.

-One day, I will have an office like this.

Here’s what you can do:

Buy a notebook, a cheap one, one you couldn’t care less about, and write all the dribble you can in it. Every bad piece of dialogue you can imagine, every stupid storyline you would never give in to following up on, and each cliche ending you’ve hated.

Then, look at it.

Pore over what you don’t like. This will give you a better idea of what you do want to write about.

This can feel like a weird form of self-torture, and you’re right, but I didn’t say this was the only thing to do. Just what you can do.

Every bad idea you’ve ever had can fit in one notebook, which you can then burn and forget.

Burn the bad, keep the good. Not the other way around.