Currently, I’m writing this against a deadline of 4 article beef-ups and 3 brand new articles, so, forgive my brevity.

On the whiteboard next to my desk is all the projects I want to complete for the year. I used painter’s tape to create a 4-square pattern, with each square representing a quarter of the year. This was a method for project tracking that I attempted last year, and quickly fell off the rails. The aesthetics interested me, just a big ol’ white board telling you what to do and when, so I hung it up again and am giving it a go. This year, I kept telling myself. This year I’m going to stick to it.

And so far, it’s relatively successful. I completed most of the project deadlines I set for myself. A few had to be adjusted, erased, and one I even did 3 months ahead of time (oops?) but I’d call it a moderate success. It’s the “Batman Begins” of workflows. Something that no one was expecting to be spectacular, but ended up being really, actually, decently good.

Quarter 1 was about learning to dedicate myself to my craft.

Quarter 2 is about finishing stuff. Doesn’t matter how good it is, or how bad it is. The goal is if there’s a deadline, a due date, self-imposed or otherwise, then I’m turning it in. On time, finished, word count met.

Today is April 1, at the time of publication, which means 3rd Draft edits of Project: GREY are starting. After taking a red pen to the paper version of the book, I slipped it into the top drawer of my desk and proceeded to forget about it. (Until it was time to do taxes and received a horrific surprise when I slid the drawer open to get my tax files. Ahh! Hello, Draft.)

This should take a month. 3rd Draft is due April 30, and from there, I’ll be passing it along to Beta Readers. Then another round of edits based on what they noticed, then, that’s it.

Dress it up, put it in a tie, and start sending it out to agents.

A week prior to last, I was on Spring Break, and so, I was given a great deal of free time to sit and read, and read I did!

This was my first exposure to John Scalzi. After being recommended his works from a few reputable sources, I felt this was the easiest way to get into it.

Captain Ean Tephe is in charge of a ship with a god as an engine. What god? It’s irrelevant. Instead, what matters is there is a great secret which binds these gods to multiple starships throughout the universe. Their Lord, the one god above all, is in command of whole worlds and offers his praise and love, so long as humans are loyal to him.

But something awful is coming and Captain Tephe’s faith is going to be tested like never before.

Scalzi’s science-fiction/gothic horror novella was a fast read, and stuck quickly to the importance of what characters were doing and what they felt. A lot of the world wasn’t fleshed out, but that’s okay. The art by Vincent Chong fills in the blanks just enough for you, the reader, to do the rest. (In all honesty, I just imagined a lot of “Dead Space” imagery when it came to the ships and the planets.)

While some character motivations were a little confusing and/or misguided, as in characters undergo massive changes to their core beliefs with little exploration of that facet, I understand. It wasn’t their story. It was Tephe’s, with his faith and belief in His Lord backing him up.

A fun read. Just don’t try to do anything happy afterwards. 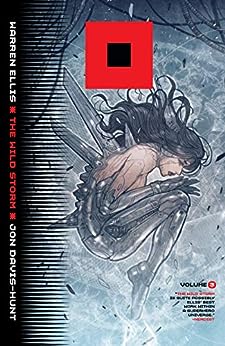 Warren Ellis and Jon Davis-Hunt’s 24-part series is coming to a close, and all the big players are taking their places.

Between the IO on Earth and Skywatch in space, as well as the various super-powered individuals making alliances on Earth to help defend themselves, (I might have squeaked at the cameo of a certain Sun King). While vol. 2 might have dragged in some spots, this one felt like Ellis was taking much larger strides to get the pieces in place, and it was more than enough to get me ready for the final chapter. Obviously, Jon Davis-Hunt’s panel layouts are simple, but effective. Detailed in all the right ways, and there will be certain pages that you just wish could be blown up to poster size.

I’ve become fascinated with artist workspaces. As of now, mostly professionals, just to gain some insight into what are the best practices. I never went to school for this, so I consider it a quick schooling. Here’s Steve Ditko’s, co-creator of Spider-Man with Stan Lee.

Earlier, I mentioned sending out my book to agents after the 4th draft. To do that, typically, you need a Query Letter, something that sells an agent on your book in a few sentences. Here’s how to write a good one.

Onward. Finish what you start. Even if it’s bad.

Bad is better than Not Done. I’m working on it this quarter, so, maybe we can all together.